Marley Parker has no other way, but to live with her brother and her father, with whom her mother got divorce when she was just 10 years old. Her brother is a popular school jock and she is a timid yet pretty girl with specs.

Her brother doesn’t stand up for her in the beginning, when his own friends make fun of her, but in the end he comes to her rescue. She gets a new friend in school and there are accounts of how she enjoys with her friend. 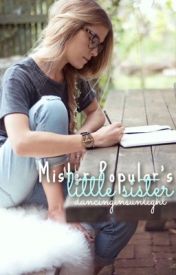 And there is a complicated background story about her mother and her grandmother and her so-called date and her ex-boyfriend. The author tries to bring in multiple story lines into one and have seems to have mixed up the thread with one another.

Though the story about her mother and the reason why she came here was credible, the story would have been better if it was only focused on that. Instead there was an unnecessary introduction about her ex-boyfriend who happens to end up in the same place as hers.The climax was cliched and expected.

It is a decent try for the author, the language and the narration are good. If the author has focused on a single story line, it would have come out much better.

What can you expect from this blog?

This blog contains the reviews of wattpad stories for people who are in the nascent stages of using wattpad and also for those who wants a suggestion to pick out a story to entertain yourself. Feel free to suggest 'picks' to review!
Follow WATTPAD REVIEW CORNER on WordPress.com

You can voice your opinions to me at luckygal95@gmail.com